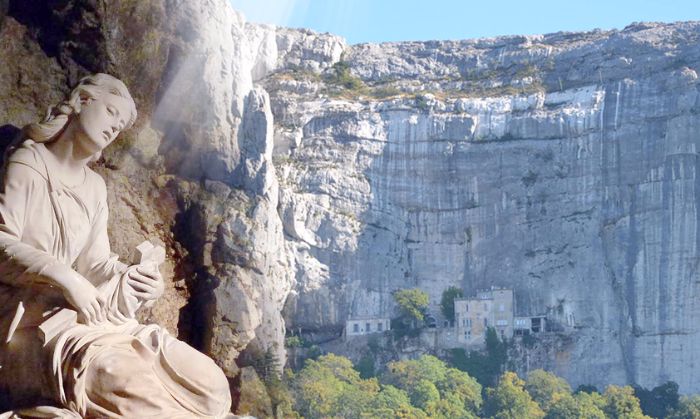 We are inviting you to this beautiful Mary Magdalene Retreat in South of France! (English,French, Italian and Romanian translation available during the retreat).

The Mary Magdalene Retreat is on July 22-24, in the area where the cave of Mary Magdalene is holding the beautiful frequency of this powerful Goddess . We visit the cave, the surrounding area and the beautiful hills and forests.
We have lunch and dinner with traditional local dishes in the small pitoresque town near the cave, we have meditation and morning Chi Kung included in the schedule, for better attunement and healing.
The retreat is a beautiful opportunity to meet like-minded people and have some girl talk, as well as feminine-masculine balancing, as we work with the energies of the Magdalene, the fabulous priestess of the sacred feminine love and Divine Feminine (men also welcomed).
We are visiting some of the most beautiful places where Mary Magdalene and other fabulous feminine energies are dwelling. The gathering is enriched with meditation, ancient teachings, spiritual talks and much more.
The visitation of Mary Magdalene’s cave and surroundings ends July 22th . We enjoy more in South of France by visiting Grasse, the famous international capital of perfumery, with its pitoresque streets and fabulous flavors, to enhance our feminine and beauty energies and also Monte Carlo  and Monaco, the beautiful area of Princess Grace where many energy vortexes are hidden in fabulous gardens and luxurious areas. There we can shop for souvenirs and local boutique perfumes, get in touch with the luscious local energy of beauty and French refinement, taste the delicious local cuisine and enjoy marvellous gardens and castles.
We end our trip in Nice, enjoying the beauty of the city and preparing for flights on July 24th .
HOW TO BOOK:
Attendance fee for 1 day (July 22th- Day trip to Mary Magdalene’s cave & surroundings with powerful meditation with Eltrayan):   is 111 Euros if you have a place to sleep or 222 E * if you need accommodation
Attendance fee for the 2 days retreat at the cave& Grasse+ Nice  is 222 Euros if you have a place to sleep 333 E * if you need accommodation.
To confirm participation and book your place send 50% of this amount at Paypal eltrayan9@gmail.com, by  July 14th, 2022. The rest of the amount is to be sent by July 21st
(If you don’t prefer PayPal, write to us at eurynome999@gmail.com ad we send you bank details).
Children are welcomed to this retreat. Free entrance for children below 12.
50% for children and adolescents up to 18.
Stay tuned and contact for details.
*The attendance fee includes:
– participation to the workshops, journeys and all activities during the retreat
– accommodation in shared double shared room ** (for single room a supplement of E50/day applies)
– meditations and guidance with Cristiana Eltrayan
– guidance in English, French, Italian and Romanian at the sacred sites and historical places.
– transportation to all sites (from Nice and back); should you come from another city directly to Nice, you can come with us using your own car or our transportation).
More about Cristiana Eltrayan: 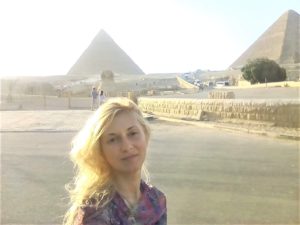 More about the retreat place: 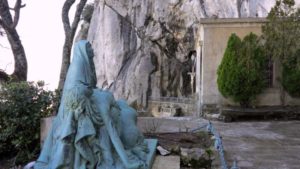 Even though Mary Magdalene has been given the reputation of having been a repentant prostitute or loose woman, these claims are not supported by the canonical gospels where the sinner is actually unnamed and there’s not a clear reference to Mary Magdalene. 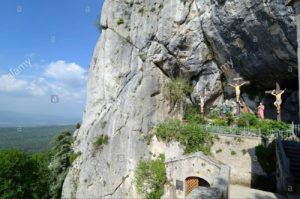 The legend said that after her group  arrived in France by boat, Mary settled in a cave in the mountain – which was difficult to access – where she lived for 30 years until she died. Since the 5th century, pilgrims from all around the world gather here to pray her and honor what’s believed to be some of her remains: a bone and a tress, kept in what it is now a Dominican convent constructed in 1279 into the cave. There

we find a shrine and see a sarcophagus made of marble that was proclaimed to be the tomb of Mary Magdalene. The 1st century tomb was uncovered in the year 1279 during excavations of the crypt beneath a small church in France. The leader of the excavation was Charles II, the Count of Provence, who claimed he was spurred to do so by a dream in which Saint Mary Magdalene appeared to him.They say that a “wonderful and very sweet smell” was noted by people there when the sarcophagus was opened. They believed the smell was symbolic of the perfume Mary Magdalene poured on Jesus’/Emmanuel’s feet before his death. Upon discovery of the tomb, Charles II built a grand basilica in place of the old church

How to get there:
We meet on May 28th at 6 pm in Nice and from there we go by cars/shuttle to the grotto of Mary Magdalene and the surroundings.
If your’re flying in: Book a flight to Nice and meet us in Nice on July 22th, at 12 pm. We recommend booking the flight and a hotel in Nice for Thursday, July 21st to be able to rest in Nice* before the trip .
If you’re arriving by train/car/bus: The meeting place will be announced closer to the event.
*Optional meet-up dinner and good bye lunch  in Nice on July 21st and 24th to meet the grup and dine together at a beautiful vegan  local restaurant. Your participation and culinary choices are optional and not included in the retreat fee.
Lunch / Dinner extra cost:  35 E/each (70 E in total;  you can opt for either or both)
Write to us at eurynome999@gmail.com or WatsApp +40746165813 to get more details about the meeting place (to be announced after July 20th ).
The retreat tuition is non refundable but is transferable to other events or online classes