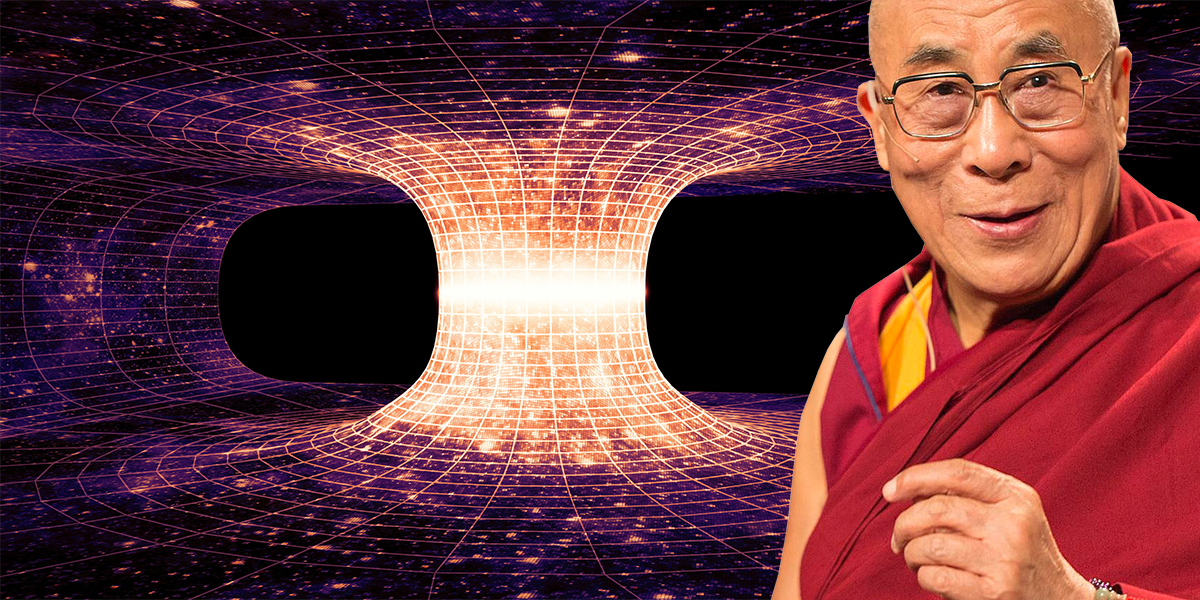 <<“Broadly speaking, although there are some differences, I think Buddhist philosophy and Quantum Mechanics can shake hands on their view of the world. We can see in these great examples the fruits of human thinking. Regardless of the admiration we feel for these great thinkers, we should not lose sight of the fact that they were human beings just as we are.”

For a long time, science and spirituality were considered to be opposing views, creating this polarization of both subjects. You were either a “Man of God” or a “Man of Science,” with no middle ground. However, we’re now observing a merging of both science and spirituality through quantum physics and the study of consciousness, shattering old thought patterns and putting an end to the previous “tug of war” between the two subjects.

Quantum physics is verifying what Buddhists and other spiritual practitioners have been saying for years, helping people to accept their inherent spiritual nature all around the world. We are fundamentally connected to everything around us, and science is finally proving that. Nevertheless, there’s still a lingering dualistic air surrounding science and spirituality: You have religious people denying scientific facts and scientists identifying themselves as self-proclaimed Atheists. However, we’re simultaneously seeing a merging of the two, and it’s truly beautiful.

Many prominent religious figures and scientists have recognized the interconnectedness between spirituality and the scientific community, including the Dalai Lama. The Dalai Lama has spoken out on numerous occasions about the similarities between quantum physics and spirituality. In fact, he even attended a conference on quantum physics and delivered a speech on the subject.

In November 2015, Tenzin Gyatso, the 14th Dalai Lama, attended a two-day conference on quantum physics and Madhyamaka philosophy in New Delhi. Madhyamaka translates to “one who holds to the middle” or “the middle way” and belongs to the Mahayana school of thought in Buddhism, which was developed by the Indian Buddhist philosopher Nagarjuna during the second century.

The conference explored a variety of topics relating to human consciousness, science, and Buddhism and included a panel of experts, physicists, and monastic scholars. The Dalai Lama was one of the speakers, and according to him, reconciling science and religious philosophies may be essential to the future of our species.

“I hope conferences like this can address two purposes: extending our knowledge and improving our view of reality so we can better tackle our disturbing emotions,” the Dalai Lama said. “Early in my lifetime, science was employed to further material and economic development. Later in the 20th century, scientists began to see that peace of mind is important for physical health and well-being… As a result of combining warm-heartedness with intelligence, I hope we’ll be better equipped to contribute to humanity’s well-being.”

See here a guided meditation that helps you find that in your body.

The Dalai Lama also explained how he first came into studying quantum physics:

When I was about 19 or 20 I developed a curiosity about science that had begun with an interest in mechanical things and how they worked. In China in 1954/5 I met Mao Zedong several times. Once he commended me for having a scientific mind, adding that religion was poison, perhaps presuming that this would appeal so someone who was ‘scientific minded’. After coming to India as a refugee I had many opportunities to meet people from many different walks of life, scientists among them. 30 years ago I began a series of dialogues focusing on cosmology, neurobiology, physics, including Quantum Physics, and psychology. These discussions have been largely of mutual benefit. Scientists have learned more about the mind and emotions, while we have gained a subtler explanation of matter.

Perhaps the most intriguing part of this quote is the fact that the Dalai Lama interpreted Zedong’s harsh words against religion as being somewhat appealing to someone with a “scientific mind.” This speaks to the belief system of science and religion being polar opposites. If you were a scientist, it was almost a social norm to make fun of religion, and vice versa, and that still remains true today.

About 15-20 years ago at some meeting, the Indian physicist Raja Ramanna told me that he had been reading Nagarjuna and that he’d been amazed to find that much of what he had to say corresponded to what he understood of quantum physics. A year ago at Presidency College in Kolkata the Vice-Chancellor Prof S Bhattacharya mentioned that according to quantum physics nothing exists objectively, which again struck me as corresponding to Chittamatrin and Madhyamaka views, particularly Nagarjuna’s contention that things only exist by way of designation.

What the Dalai Lama is recognizing is that the ancient knowledge within these Buddhist texts is now being proven by quantum physics. Physicists are actually catching up to what these texts revealed centuries ago, but only now can it be verified by more modern science.

The Dalai Lama ends his speech by challenging us to take action:

Right now when we see the sad things going on in the world, crying and prayer won’t achieve very much… Although we may be inclined to pray to God or Buddha to help us solve such problems, they might reply that since we created these problems it is up to us to solve them. Most of these problems were created by human beings, so naturally they require human solutions. We need to take a secular approach to promulgating universal human values. The sense that our basic human nature is positive is a source of hope [that]… If we really make an attempt, we can change the world for the better.

These last words have a very sobering effect, though I do believe that through prayer and intention we can achieve great things. The power of the mind and thoughts is strong, and science is now proving that as well. However, actions are equally as important.

What Exactly Is Quantum Physics?

From this, scientists have made all sorts of discoveries, including that we create our own realities.

“A fundamental conclusion of the new physics also acknowledges that the observer creates the reality. As observers, we are personally involved with the creation of our own reality. Physicists are being forced to admit that the universe is a “mental” construction. Pioneering physicist Sir James Jeans wrote: “The stream of knowledge is heading toward a non-mechanical reality; the universe begins to look more like a great thought than like a great machine. Mind no longer appears to be an accidental intruder into the realm of matter, we ought rather hail it as the creator and governor of the realm of matter.”

Quantum physics has also shown that the present can change the past, that time is an illusion, and that an after-life exists. Quantum mechanics is essentially the science of consciousness and spirituality, proving just how connected we are to everything in existence, which is all an illusion.>>

See here a guided meditation that helps you find that essential energy in your body:

Source of the article.