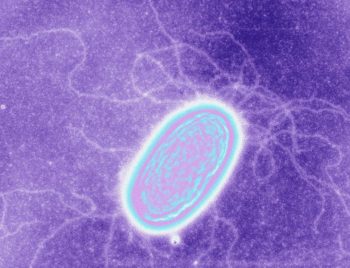 “Unlike any other life on Earth, these extraordinary bacteria use energy in its purest form – they eat and breathe electrons – and they are everywhere.Tick an electrode in the ground, pump electrons down it, and they will come: living cells that eat electricity. We have known bacteria to survive on a variety of energy sources, but none as weird as this.

We already knew about two types, Shewanella and Geobacter. Now, biologists are showing that they can entice many more out of rocks and marine mud by tempting them with a bit of electrical juice. Experiments growing bacteria on battery electrodes demonstrate that these novel, mind-boggling forms of life are essentially eating and excreting electricity.

That should not come as a complete surprise, says Kenneth Nealson at the University of Southern California, Los Angeles. We know that life, when you boil it right down, is a flow of electrons: “You eat sugars that have excess electrons, and you breathe in oxygen that willingly takes them.” Our cells break down the sugars, and the electrons flow through them in a complex set of chemical reactions until they are passed on to electron-hungry oxygen.

“Life’s clever. It figures out how to suck electrons out of everything we eat and keep them under control”

In the process, cells make ATP, a molecule that acts as an energy storage unit for almost all living things. Moving electrons around is a key part of making ATP. “Life’s very clever,” says Nealson. “It figures out how to suck electrons out of everything we eat and keep them under control.” In most living things, the body packages the electrons up into molecules that can safely carry them through the cells until they are dumped on to oxygen.

“That’s the way we make all our energy and it’s the same for every organism on this planet,” says Nealson. “Electrons must flow in order for energy to be gained. This is why when someone suffocates another person they are dead within minutes. You have stopped the supply of oxygen, so the electrons can no longer flow.”

The discovery of electric bacteria shows that some very basic forms of life can do away with sugary middlemen and handle the energy in its purest form – electrons, harvested from the surface of minerals. “It is truly foreign, you know,” says Nealson. “In a sense, alien.”

Nealson’s team is one of a handful that is now growing these bacteria directly on electrodes, keeping them alive with electricity and nothing else – neither sugars nor any other kind of nutrient. The highly dangerous equivalent in humans, he says, would be for us to power up by shoving our fingers in a DC electrical socket.

To grow these bacteria, the team collects sediment from the seabed, brings it back to the lab, and inserts electrodes into it.

First they measure the natural voltage across the sediment, before applying a slightly different one. A slightly higher voltage offers an excess of electrons; a slightly lower voltage means the electrode will readily accept electrons from anything willing to pass them off. Bugs in the sediments can either “eat” electrons from the higher voltage, or “breathe” electrons on to the lower-voltage electrode, generating a current. That current is picked up by the researchers as a signal of the type of life they have captured.

“Basically, the idea is to take sediment, stick electrodes inside and then ask ‘OK, who likes this?’,” says Nealson.

Over at the University of Minnesota in St Paul, Daniel Bond and his colleagues have published experiments showing that they could grow a type of bacteria that harvested electrons from an iron electrode (mBio, doi.org/tqg). That research, says Jangir’s supervisor Moh El-Naggar, may be the most convincing example we have so far of electricity eaters grown on a supply of electrons with no added food.

But Nealson says there is much more to come. His PhD student Annette Rowe has identified up to eight different kinds of bacteria that consume electricity. Those results are being submitted for publication.

Nealson is particularly excited that Rowe has found so many types of electric bacteria, all very different to one another, and none of them anything like Shewanella or Geobacter. “This is huge. What it means is that there’s a whole part of the microbial world that we don’t know about.”

“This is huge. What it means is there’s a whole part of the microbial world that we don’t know about”

Discovering this hidden biosphere is precisely why Jangir and El-Naggar want to cultivate electric bacteria. “We’re using electrodes to mimic their interactions,” says El-Naggar. “Culturing the ‘unculturables’, if you will.” The researchers plan to install a battery inside a gold mine in South Dakota to see what they can find living down there.

NASA is also interested in things that live deep underground because such organisms often survive on very little energy and they may suggest modes of life in other parts of the solar system.

Electric bacteria could have practical uses here on Earth, however, such as creating biomachines that do useful things like clean up sewage or contaminated groundwater while drawing their own power from their surroundings. Nealson calls them self-powered useful devices, or SPUDs.

Practicality aside, another exciting prospect is to use electric bacteria to probe fundamental questions about life, such as what is the bare minimum of energy needed to maintain life.

For that we need the next stage of experiments, says Yuri Gorby, a microbiologist at the Rensselaer Polytechnic Institute in Troy, New York: bacteria should be grown not on a single electrode but between two. These bacteria would effectively eat electrons from one electrode, use them as a source of energy, and discard them on to the other electrode.

Gorby believes bacterial cells that both eat and breathe electrons will soon be discovered. “An electric bacterium grown between two electrodes could maintain itself virtually forever,” says Gorby. “If nothing is going to eat it or destroy it then, theoretically, we should be able to maintain that organism indefinitely.”

It may also be possible to vary the voltage applied to the electrodes, putting the energetic squeeze on cells to the point at which they are just doing the absolute minimum to stay alive. In this state, the cells may not be able to reproduce or grow, but they would still be able to run repairs on cell machinery. “For them, the work that energy does would be maintaining life – maintaining viability,” says Gorby.

How much juice do you need to keep a living electric bacterium going? Answer that question, and you’ve answered one of the most fundamental existential questions there is.

Wire in the mud

Electric bacteria come in all shapes and sizes. A few years ago, biologists discovered that some produce hair-like filaments that act as wires, ferrying electrons back and forth between the cells and their wider environment. They dubbed them microbial nanowires.

Lars Peter Nielsen and his colleagues at Aarhus University in Denmark have found that tens of thousands of electric bacteria can join together to form daisy chains that carry electrons over several centimetres – a huge distance for a bacterium only 3 or 4 micrometres long. It means that bacteria living in, say, seabed mud where no oxygen penetrates, can access oxygen dissolved in the seawater simply by holding hands with their friends.

Such bacteria are showing up everywhere we look, says Nielsen. One way to find out if you’re in the presence of these electron munchers is to put clumps of dirt in a shallow dish full of water, and gently swirl it. The dirt should fall apart. If it doesn’t, it’s likely that cables made of bacteria are holding it together.

Nielsen can spot the glimmer of the cables when he pulls soil apart and holds it up to sunlight (see video).

It’s more than just a bit of fun. Early work shows that such cables conduct electricity about as well as the wires that connect your toaster to the mains. That could open up interesting research avenues involving flexible, lab-grown biocables.”Source

Also, another interesting aspect is that there are also plenty of humans able to nourish themselves from free energy, even without using electrodes :). From scientists, to doctors, therapists and musicians, many of them rarely go public about this, while others committed their lives to holding trainings and teach ing others about this possibility. Our research since 2009 has discovered many of them and recorded their stories, not only online, but also by meeting them in person and spending time with them, getting accustomed to their lifestyle. We’ve documented the information as recorded meetings on a platform called the Pranic COnsciousness Summit, and research is still continuing as long as we meet more of them.

Also, festivals are being organized where they speak about their knowledge, their mastery and their lifestyle.