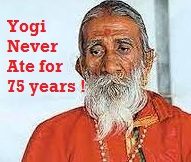 Dr.Sudhir Shah has monitored Prahlad Jani, the breatharian yogi who has been nourished by prana for more than 70 years. His hospital research on this has proven that Pralad Jani was indeed nourished by an internal source of nourishment (other than phisycal food or liquids) and that during the days of close surveillance in one of the most reknown hospitals of Ahmedabad, India , he experienced no depletion or shift in vitality,thus proving that pranic nourishment is possible.
The two research tests, have been made one in 2003 and one in 2010, both involving Dr Sudhir Shah, neurologist at the Sterling Hospitals in Ahmedabad, India, who had studied other people claiming to have exceptional abilities, including Hira Ratan Manek. In both cases the investigators confirmed Jani’s ability to survive healthily without food and water during the testing periods. See short video on this,here:

Dr.Sudhir Shah is an Indian neurologist, professor and the head of the department of neurology at Smt. NHL Municipal Medical College, Ahmedabad. Holder of an MD in general medicine and a DM in neurology, he is associated with the Neurological Society of India, Indian Academy of Neurology and Association of Physicians of India as a member. He is known for his research on brain cells and books on neurology and Jainism which have reportedly been sold over 50,000 copies, the earnings of which have been donated to charities. He is a former chairman of the National Jain Doctor’s Federation as well as a director of neurosciences at Sterling Hospitals and has served as the honorary neurologist to the Governor of Gujarat. He has written several articles on neurology and spirituality which include Journey to Happiness and Peace, The Art and Science of Meditation, Diseases of The Brain and Nervous System, and Jainism: A Super Science and is a co-author of Meditation Must, a book detailing the medical aspects of meditation. The Government of India awarded him the fourth highest civilian honour of the Padma Shri, in 2016, for his contributions to medical science.

His scientific titles today are:
– Consultant Neurologist, practicing for 27 years at Ahmedabad, INDIA.
– Professor and Head department of Neurology at KM school of PG medicine and research, Sheth V. S. General Hospital, Ahmedabad. He is a teacher for DM Neurology at this hospital.
– Honorary Neurologist to H. E. The Governor of Gujarat.
– Director of Neurosciences, Sterling Hospital.
– Immediate past chairman of National Jain Doctor’s Federation
– Executive Committee Members at Indian Academy of Neurology

Dr. Shah has pblished a very interesting article on the possibility of living on prana, which, with his permission, we entirely display below:

“PROLONGED FASTINGS-HOW IS IT
POSSIBLE – A HYPOTHESIS

Dr. Shah has recently been interviewed for the Pranic Cosncoisness Summit, declaring that the science has to be rephrased to be able to encompass the new discoveries in the evolution of humanity.