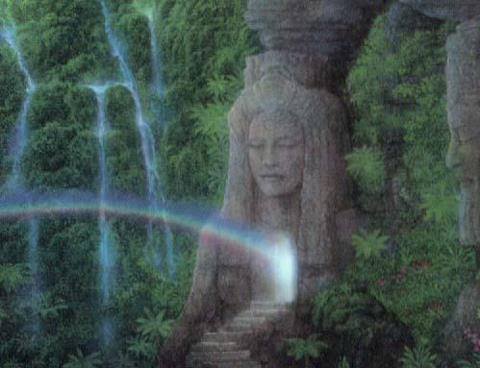 The old and new testaments of the bible, as well as ancient Greek and Egyptian texts, include stories of those who defied death via forms of ascension, but to many, the most compelling tales of transcendence are accounts from the Tibetan Buddhist rainbow body tradition.

While ascension stories are from the distant past, i.e. Enoch and Lazarus (Old Testament) are debated as to whether they are fact or myth, examples of rainbow body events from this century are documented and available. Some believe that ascension and attainment of the rainbow body are the same thing, but arguably, there are differences — the Tibetan Buddhist rainbow body is the result of years of specific, disciplined practice with a motive of profound compassion for all beings.

Although the Tibetan tradition is stating that this stage (the Light Body/Rainbow body) is only perfected at the moment of death, several masters have proven that life on Earth can continue after attaining this stage and that one does not have to leave the physical plane in order to maintain that state. In this fragment of the webinar Immortality and Pranic Life , Cristiana Eltrayan, holistic public speaker, author and therapist, explains more about this:

In Tibet and Central Asia, the Buddhist rainbow body tradition goes back to the 8th century, beginning with the great master Padmasambhava, but 20th and 21st century documentation shows that this is no myth or legend — practitioners, from the highest lamas to the most humble lay people, have attained rainbow body.

MODERN PROOF: THE DEATH OF RANGJUNG DORJE, THE SIXTEENTH KARMAPA

As first-world people, we like straight-forward definitions and categories — but Tibetan Tantric Buddhism, which integrated aspects of the earlier, shamanic Bon tradition, embraces no such view. Every instance of a death with signs of rainbow body attainment is unique, and no one can accurately predict what will happen after a great master’s breath and heartbeat stop. Generally, the individual, who entered meditation before death, continues to maintain the meditation posture — they do not topple, slump, or display rigor mortis. The body, particularly the area around the heart, stays warm. This was recorded by medical science in the case of the Sixteenth Karmapa, Rangjung Dorje, who died in a Chicago hospital in 1981.

Head of the Kagyu Lineage of Tibetan Buddhism, the Karmapa shared the same status and importance as the Dalai Lama, head of the Gelugpa Lineage. He travelled to the West in 1974 with the wish to transfer the teaching of the dharma to places it would flourish — earlier, he had prophesied that Tibet would not gain independence from the Chinese, and that the Tibetan refugees of the Cultural and People’s Revolutions would not be allowed to return.

The following account is from Karmapa’s attending physician, Dr. David Levy. He said that after noting indications of heart failure on the monitors, the medical team tried to revive Karmapa, but gave up after about 45 minutes. “We began to pull out the tubing, but I suddenly saw his blood pressure was 140 over 80. A nurse screamed, ‘he has a good pulse!’” Levy said.

The team members were incredulous. An older Tibetan lama in attendance patted Levy on the back, as if to say, “it’s impossible, but it happens.” Levy said, “it was clearly the greatest miracle I had ever seen.”

Levy reported that 48 hours after the time of death, Karmapa’s chest was still warm. “My hands were both warm, but his chest was warmer,” he said. “If I moved my hands towards the side of his chest, the body was cold, but the area around the heart stayed warm.” He also reported that there was no odor or decay, which typically set in quickly after death. “He stayed in deep meditation for three days, then it ended — he became cold and the process of death set in. The atmosphere changed as well,” Levy said.

These unusual post-death occurrences are accepted as normal in the case of those who reach high levels of attainment — because of this, Tibetans observe a clear precept to never move or touch a body for at least three days after the moment of death, particularly in case of realized beings and meditation masters.

The Karmapa also displayed signs of rainbow body years before his death. In the 1970s, Karmapa traveled throughout the U.S. giving the public Black Crown Ceremony empowerment. This teaching is only given by those of the Karmapa lineage, and has been passed to the present via an unbroken lineage from the early 1400s.

During the key moment in the empowerment, while Karmapa was holding the black crown over his head, an attendee snapped a picture. When the film was developed, the image of the Karmapa was transparent — the brocade of his seat can be clearly seen through the ghost-like image of his body. Those in attendance saw nothing out of the ordinary at the time. This image has been widely circulated since, and is considered a vivid demonstration of rainbow body.” Source

You might think that building the light body is something destined just for the few “chosen ones”, usually people who live in the hights of the Himalayas. The cool thing is there are present day,modern masters, that live in busy cities and in a quite mundane environment, but their light body is strong enough to be only nourished by prana or liquids (without the need to take physical food.

As we have met, lived with and even interviewed most of them for the Pranic Cosnciousness Summit, we personally know that this is true and possible. There’s even a book published about them and their lifestyle, also stating how this could be possible from a scientific point to view.

Some of them even participate to festivals and hold retreats where you can meet them in person without having to go to a secluded monastery or some cave in some hidden mountains. This is all possible thanks to the evolution of humanity into a more conscious, more aware state and we’re sure more data will come out on this topic as we become more and more open to this.