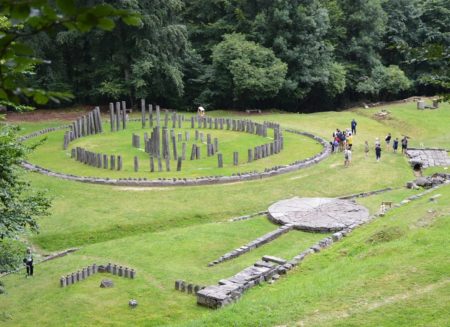 Do ‘sacred spaces’ – both natural and man-made – correspond with what the Irish would call Thin Places – locations where the ethereal world is accessible to mortals, and two planes of different dimensional frequencies might overlap?

Many megaliths and religious edifices around the globe over millennia qualify as ‘sacred sites’ due to their heightened spiritual and metaphysical energy, while many more magnificent works created by the hand of nature have drawn seekers and worshipers since antiquity.

A more recently adopted term for such places is ‘Star-gates’. Their entrances take various forms: inside temples, pyramids, caves and artificial hollows in rock faces: under artificial hills (called ‘mounds’ in both Britain and North America, or ‘tells’ in the Middle East); outdoors in vortexes between rocky knolls (as at Sedona). Some are underwater.

Many of them are said to sit along the Earth’s energy meridians or Leylines. When we examine the energy flows around the planet, a few Parallels of latitude stand out as being extremely significant. The most notable are those of 15°North and 33°North; then, 15°South and 33°South. [The number 33 is meaningful to many and entire websites are devoted to the 33°N Parallel]. And the polar regions are equally important.

Ancient mystery traditions around the world share the view that certain places possess a higher concentration of power than others. Interestingly, these ‘power places’ are often said to be connected with the heavens by an invisible hollow tube or conduit, and this umbilical connection enables shamans to engage with other worlds or dimensions during ritual.

With the mounting evidence of the obvious connections between the ancient civilization on the Romanian territory and the Egyptian, Mayan  and Chinese ones, it is not too much of a stretch to consider the sacred sites on this land as being places where energy vortexes or dimensional portals might have long existed. 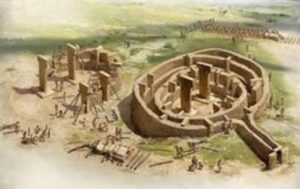 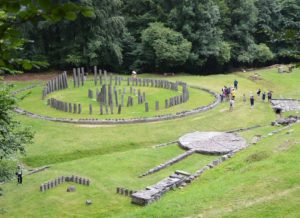 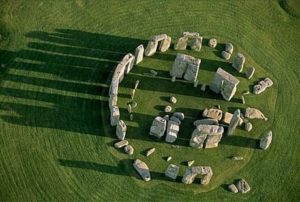 The priorities on any list of mysterious Romanian areas would have to be Sarmisegetuza and the Bucegi Plateau. Even visitors who would not normally consider themselves ‘spiritual’ frequently report having transcendental experiences at these two locations in the mystical heart of this country.

Sacred Sites-Portals to Other Realms?

In a recent issue of Atlantis Rising magazine #130, author Ken Wells raises the question of Vortexes in his article ‘Portals to the Multiverse?’ His main concern is to connect sites of Indigenous rock art to the phenomenon of Dimensional Portals.

Wells writes: “(…) very few in the field have directly addressed the striking similarities present in indigenous rock art across the globe. I am not referring to circles, zig-zags, spirals, and such. I am speaking of the eerie similarities in the ‘anamorphic’ images, found on all continents. These images span insurmountable differences in time and geography and yet bare (sic) more than a passing resemblance. It is difficult to believe that the similarities of the shamanic and spiritual experience seen in ‘Multiverse’ panels (are) globally organic – that is, abstracted from time and culture. Difficult to believe unless, of course, they are all traveling to a similar – or perhaps the same – dimension of the ‘Multiverse’ on their shamanic journeys.”

The majority of the world’s population today professes a belief in an invisible plane where unseen beings dwell, beyond the perception of our five senses. This is often the result of cultural beliefs or religious convictions. Those who struggle with believing in the Dream time or a spirit world might instead accept the existence of additional dimensions, as posited by some quantum physicists. All civilisations and cultures have myths and legends of deities, star beings and heroes coming and going between Earth and this other, invisible realm.

There are certain guidelines that apply to identify sites around the globe as potential portals:
– Visitors sense a high energetic presence and sometimes have a profound experience.
– Unexplained occurrences and disappearances take place in the area.
– They are made of stone, have patterns carved into or painted onto rock, and sometimes have caves and tunnels running beneath them.
– Their petroglyphs portray meaningful images of the sky, beings and spirits and sometimes vehicles resembling aircraft/UFOs – and maybe symbols with as yet undeciphered messages.

There is a magical quality at sacred sites. The powerful charge of the land resonates with your own body’s meridians, there’s a whisper of ancients carried in the air, the nurturing love of Mother Nature that wraps itself around you, and an amplified energy plugs you into a higher consciousness. It’s something that can only be felt by being there as you become a conduit between celestial and terrestrial energies. When you connect to the power of a such a place, your power returns to you. The organizers of the Cosmic Consciousness Conference of Australia

[In 2008 NASA may have unwittingly supported the possibility  when it published details of an investigation into FTEs, or flux transfer events, describing how the Earth is linked to the Sun by a network of magnetic portals which open every eight minutes. Such discoveries help to scientifically validate the long-held belief by the New Age community that sacred sites and ancient megalithic structures are places connecting this terrestrial plane with the celestial spheres.]

In the United States, a number of Indigenous sites have come to be connected to what are known as Vortexes, particularly in Sedona, Arizona. The ancient Native American Yavapai people lived all around that area, where they painted petroglyphs and established cliff dwellings, indicating to future archaeologists and visitors that their creative force, the energy of their Great Mother, was powerful and palpable.

There are attractions in Sedona today, notably Cathedral Rock, Bell Rock, Boynton Canyon, Airport Mesa and the Chapel of the Holy Cross, that are all claimed to be Vortex sites. Residents and pilgrims alike report that the Earth’s energy swirls in these spots, with a kinetic electricity that twists the surrounding trees and makes visitors’ bodies tingle.

Ancient sacred places may actually be attracting, storing, even generating their own energy field, creating the kind of environment where one can enter an altered state of consciousness. A small change in the local environment is enough to stimulate the human body’s electro-magnetic circuitry and create a change in awareness. People who visit ancient temples and megalithic sites often describe such a sensation.

According to the Ancient Origins website, an engineer by the name of Charles Brooker did a study in the eighties to find if there was magnetism in sacred sites, using the Rollright stone circle in England as a test case. A magnetometer survey of the site revealed that a band of magnetic force was attracted into the stone circle via a narrow gap of stones acting as the entranceway; this magnetic band then spiralled towards the centre of the circle as though descending down a rabbit hole. Two of the circle’s western stones were also found to pulsate with concentric rings of alternating current, resembling ripples in a pond.

The analysis led Brooker to state how, “the average intensity of the [geomagnetic] field within the circle was significantly lower than that measured outside, as if the stones acted as a shield.”

Studies conducted by the late physicist John Burke also discovered how the stones of Avebury – the world’s largest stone circle – are deliberately placed and aligned so as to focus electro-magnetic currents to flow in a premeditated direction using an identical principle to modern atomic particle colliders, in which airborne ions are steered in one direction. Its megaliths are designed to attract a ground current into the site.

Electrodes planted at Avebury reveal how its circular ditch breaks the transmission of telluric ground current and conducts electricity into the ditch, in effect concentrating energy and releasing it at the entrance to the site, sometimes at double the rate of the surrounding land.

Magnetic readings at Avebury die away at night to a far greater level than can be accounted for under natural circumstances. They charge back at sunrise, with the ground telluric current from the surrounding land attracted to the henge just as magnetic fluctuations of the site reach their maximum.

An investigation into the Carnac region of France, where some 80,000 megaliths are located, reveals a similar technology at work. The leading researcher, electrical engineer Pierre Mereux, found that Carnac’s dolmens amplify and release telluric energy throughout the day, with the strongest readings occurring at dawn. The voltage and magnetic variations are related, and follow a phenomenon known as electric induction. The dolmen behaves as a coil or solenoid, in which currents are induced, provoked by the variations of the surrounding magnetic field.

The composition of the stones is key to their ability to conduct energy – these phenomena are not produced with any intensity unless the dolmen is constructed with crystalline rocks rich in quartz, such as granite. The effect of sacred sites behaving like concentrators of electromagnetic energy is enhanced by the use of stone that contains substantial amounts of magnetite, making them act like magnets. Being high in quartz makes them piezoelectric, which is to say they generate electricity when compressed or subjected to vibrations.

Stories of comings and goings through ‘gateways’ abound in ancient mythology – much of which I believe is rooted in fact and real personalities. I am referring not only to Apollo at Delphi but also the Minoans & Mycenaeans at the Palace of Knossos in Crete; Asclepius at the Valley of the Temples in Sicily; Mithra at the cave in Ostica, Antica; the Asclepiadae at Pluto’s Gate in Turkey (Gobekli Tepe and Çatalhöyük were other sacred sites in Turkey).

One of the most enigmatic historical figures – who I believe really existed – was Viracocha. He made his debut on the terrestrial plane in the 1st millennium BC at Sacred Rock on Isla del Sol (Island of the Sun) on the Bolivian side of Lake Titicaca (which borders Peru), at the site of a labyrinthine structure called the Chicana. He later had the 10-ton archway we know as the Gate of the Sun hewn from a single piece of stone, standing 3 metres tall by 4 metres wide at Tiwanaku (Tiahuanaco). This was reputed to be a kind of wormhole that allowed Viracocha to come and go between this dimension and the next as he pleased.

Viracocha’s Gate of the Sun at Tiwanaku

Just a little inland from Lake Titicaca, is Puerta De Hayu Marka, the ‘Gateway of the Gods’.  Carved into a natural rock face and measuring 7 x 7 metres, it looks like a gigantic door with a smaller alcove in the centre at the base, which is 1.8 metres in height.  There is a groove in the centre of the alcove into which, it is said, a golden ‘Sun disc’ was inserted to activate the inter-dimensional gateway.  Amaru Meru, the first priest-king of the Incas, arrived via this portal, then later some worthy individuals are said to have travelled out through the gate to assume a ‘glorious new life of immortality’.

Gateway of the Gods at Hayu Marca, Peru

Now that quantum science has opened up the topic of other dimensions to the mainstream, many of us feel that the 21st Century heralds not only the Age of Technology, but more importantly, an Age of Ascension. The time feels right to attune with higher frequencies and try to connect with other realms that may be within reach.” Source

Participants get to travel through amazing mountain areas of Romania and visit pilgrimage places an sacred sits with beautiful energy portals in Transilvania.

Along the road they tune in to the beautiful energies, find out more about the Pre-Christian Sun-worshiping places they visit and the history of an ancient magic civilization that is connected to the greatest sacred civilizations of the world.

[3] Atlantis Rising Magazine #130, Portals to the Multiverse by Ken Wells