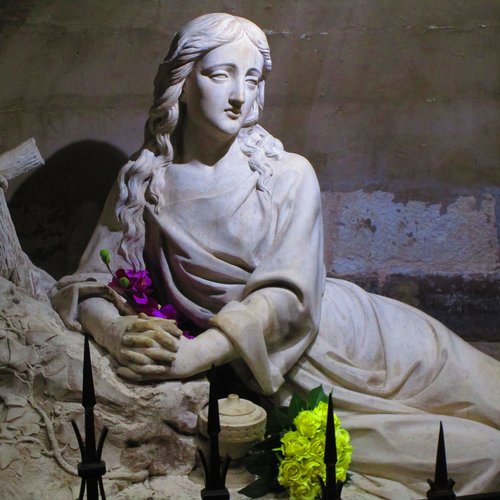 Mary Magdalene, is said to be Jesus’ (Emmanuel’s) greatest disciple, the woman who, according to texts included in the New Testament, witnessed his crucifixion and resurrection and considered a saint. She’s been said to have lived for 30 years in a cave in France, until her death.

Even though she has been given with the reputation as being a repentant prostitute or loose woman, these claims are not supported by the canonical gospels where the sinner is actually unnamed and there’s not a clear reference to Mary Magdalene.

Beyond this, what’s sure and written is that she was the first person to see the empty tomb of Jesus/Emmanuel after his Resurrection and then to see him in flesh after that.

According to tradition – or legend – Mary Magdalene, her sister Martha, her brother Lazarus, Maximin (one of the 72 disciples) and about 70 other Christians, in 48 B.C. were placed in a boat without sail or rudder, to escape persecutions and a potential execution after imprisonment. They sang and prayed, and Jesus/Emmanuel helped them and guided the boat to a French town, Saint-Mary-of-the-Sea, not far from Marseilles (the then-called shores of Gaul). According to the legend, a gypsy took them in and cared for them.

The legend said that after the group arrived in France, it scattered, and Mary Magdalene and Lazarus started to preach Christianity to the native population. Later on, Mary settled in a cave in the mountain – which was difficult to access – where she lived for 30 years until she died. Since the 5th century, pilgrims from all around the world gather here to pray her and honor what’s believed to be some of her remains: a bone and a tress, kept in what it is now a Dominican convent constructed in 1279 into the cave.

People who go there now can find a shrine and see a sarcophagus made of marble that was proclaimed to be the tomb of Mary Magdalene. The 1st century tomb was uncovered in the year 1279 during excavations of the crypt beneath a small church in St. Maximin in France. The leader of the excavation was Charles II, the Count of Provence, who claimed he was spurred to do so by a dream in which Saint Mary Magdalene appeared to him.

They say that a “wonderful and very sweet smell” was noted by people there when the sarcophagus was opened. They believed the smell was symbolic of the perfume Mary Magdalene poured on Jesus’/Emmanuel’s feet before his death. Upon discovery of the tomb, Charles II built a grand basilica in place of the old church.

Would you like to visit what may be considered one of the most mysterious places in France? Here’s what to expect.

After 1 hour of walk uphill, you reach a natural cavity, now transformed into a shrine. You need to walk through a woodland and then stairs, before reaching the place, with the temperature dropping down fast as you get close to the tip.

Get ready to leave your “world and time” ahead, because it will be like jumping into the past. At almost a thousand meters high, you can enjoy a wonderful view of the landscape with hills and the sea glimpsed on the horizon.

Like in the best adventures, a Pietà statue standing on the square, looks at the mountain and indicates you the entrance to a big cave. Your first view is a massive altar and behind it the Mary Magdalene statue standing right on the location where she was used to sleep – the only part of the cave without water infiltrations. Here, every day monks celebrate the Mass for the pilgrims arrived after a long and tough trip.” Source

The cave is sumptuous and the nature around it is pure and pristine and getting back to civilization after this is like a re-immersion after being in a deep state of peace.

There is a Mary Magdalene’s Retreat in South of France this year. See details here